I always feel like a poser when I say "work out" there is really no way that the mess I make of myself on that treadmill is a "work out" I am going so sllllloooooowwww. It's not that I'm worn out, it's that I'm in so much pain. I have shin splints, and some heal pain that makes me say lots of bad words!

I feel like part of the pain is because I don't work out enough. I'm really hit or miss with it. I have good intentions, but rarely ever get it done. Yes, I'm a SAHM you'd think I have all the time in the world. And, I should. But I have a 1 yr old to go along w my 4 yr old.....and the little one climbs me, literally climbs me with every workout I try! I really need to start trying to get it done during his nap. But, usually instead of working out, I try to clean something that's hard to get done whole he's up. So my goal is to start making my workout a priority!!

I always see the workout pics on Instagram during the day, and think "damn, I need to get it done" I have to make the time!! I want to try Zumba!!! But it's an hour video.....I do not have that much time! So we'll see what I can figure out!!

How do you make time for your work out? What tips do you have for a mom with small children, and no one to watch them? A gym isn't in the budget for this SAHM so all workout ideas must be done at home! :) 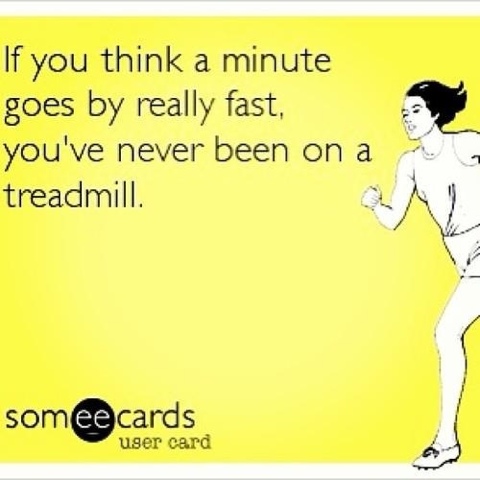 Posted by Kristen at 5:55 PM No comments: Links to this post

You've heard the saying "blondes have more fun" well I don't know if that's necessarily true, but I'm loving my blonde hair! It's just highlighted not completely blonde, but it's enough of a change for me. I was feeling frumpy and needed something new.

While I'm on the subject of trying new things, I'm thinking of starting a YouTube channel. I get a lot of emails about my makeup, and just different products I use. I thought the YouTube channel would be an easy way to show my routines. Obviously the 35 seconds on keek doesn't give me enough time!! They are quick routines, but not that quick!

On another note, I went on a walk today. Yes, a walk. I've basically decided that I'm just not cut out to be a runner. I have. A few issues with uneven hips, causing my legs to hurt....and even walking I'm in a ton of pain. 1/2 mile into my walk today and I was in pain. Now my heel is hurting so bad I can barely walk. Ugh!!! So I don't really know what the answer to this problem is. Do I push through the pain and hope that over time some of it will get better? Am I in so much pain because I just started doing this? Anyone else gave pain in ankles and shins when you first started trying to get moving? Tips would be appreciated! :) 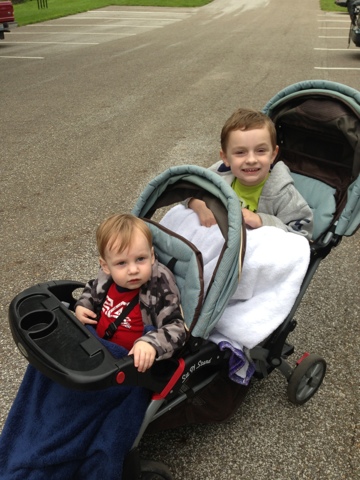 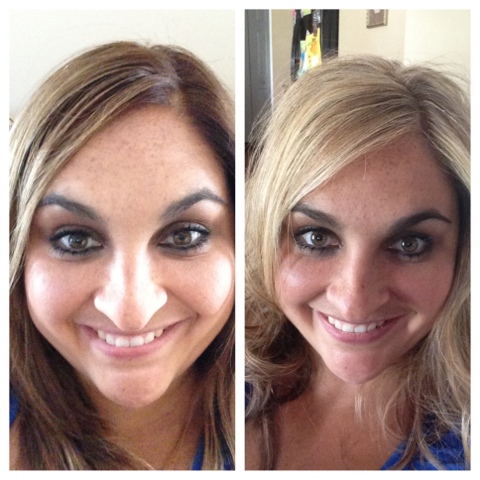 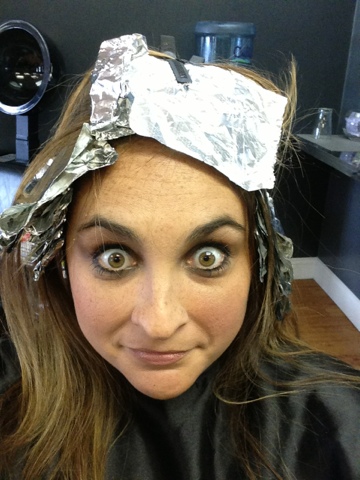 Posted by Kristen at 6:26 AM 2 comments: Links to this post

Wow. Sometimes that is all I can say. Since March, I have become a full time stay at home mom. I love love love it more than ever.....but wow. I feel like I don't have a second to breathe alone sometimes. There are those moments when I seriously feel like I'm going to scream! I've been at home for four years but watched other children....and it wasn't just my boys and I until recently. Let me say again I DO LOVE IT.....but it definitely gives me a lot of stress sometimes!

All the glorified images I had of my house being spotless, every corner was dusted, every inch of the house being in order.....yeah that DOESN'T happen. Instead, I feel like I clean up the same crap 375,000 times a day! Why do I feel like that? Ummm because it's true! I'm trying really hard not to stress over that part of the deal. But, I do sometimes feel that if I don't get a big project done during the day, that it's a bad day. With a 4 year old, and a 1 year old.....it's hard to get a lot done, whether you're home 40 hours a week or 4 hours a week. That's just the way it is I guess. I try to do as much as I can while Drew takes a nap.

The things I love about being at home, are of  course the obvious....staying with my boys. But, I also like being able to leave the house during the day! That hasn't happened in 4 years! I can grocery shop when only the old people are out....and I mean older than me (I'm 30 now ya know lol) We have been going to the park, having play dates, all the fun things we were never able to do before and I love that. I'm learning that the mess will still be here when I get home from the park.....I'll pick it up then, and then probably 15 more times before bedtime as well, and that's ok. I love not needing to be in a certain place at a certain time. If the boys want to sleep in a little bit....whatev. We got nothin but time! But there are a few little things about staying at home, that I need to get used to.

When I first started this stay at home stuff.....Mine and Cole's relationship suffered a lot. He was bored, as was I. He went from being around kids, and going to part time preschool to.....being with Mom and baby brother all day everyday. He would act out, talk back (more than usual) and I was constantly screaming at him it felt like. I prayed and prayed at night for me to be better at dealing with him. About a week ago, I just started trying to calm down and when he was acting out, instead of yelling at him, I just gave him more positive attention. As corny as it sounds, giving him a hug or playing with just him. And so far, it has worked. He's become much more loving towards me, and he only has moments where his behavior is out of control instead of days. Thank goodness! I'm really enjoying not feeling like the bad guy all the time. He even chose me over Grammy the other day. Grammy told me her heart was breaking, but I was trying to hold back a smile! lol. Terrible, I know.

I am having a bit of a hard time with not making any money to contribute to our family. I thought I would handle that great, but I'm really not. I find myself feeling guilty if I spend anything. My hubs is absolutely wonderful, and none of these feelings are coming from him whatsoever. I just feel like kind of a deadbeat. lol There are days when I am fine with it, and then there are days like today, when I go get my hair done and feel absolutely horrible for spending money on that. These are all things we will just need to work on in time. Right now, it's still one day at a time, and one different train wreck of emotions each day.

But, would I rather leave my kids and go to work each day? Absoulutely not. I know there are tons of working mothers, and I give them props. I don't know that I could handle working outside the home, and taking care of a house and kids. I know there are also moms that say, staying at home isn't for them. That's ok too. That's what makes this world go round! Different strokes for different folks, right? lol. As for me, I love staying at home....just need a little more time to work out the kinks! We'll get there!

Now we get to do things like doughnut dates for breakfast. :) 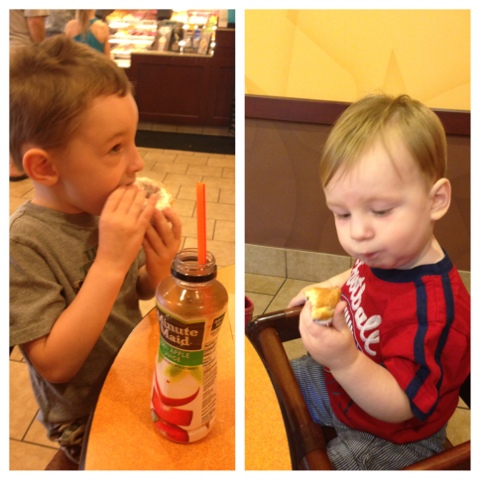 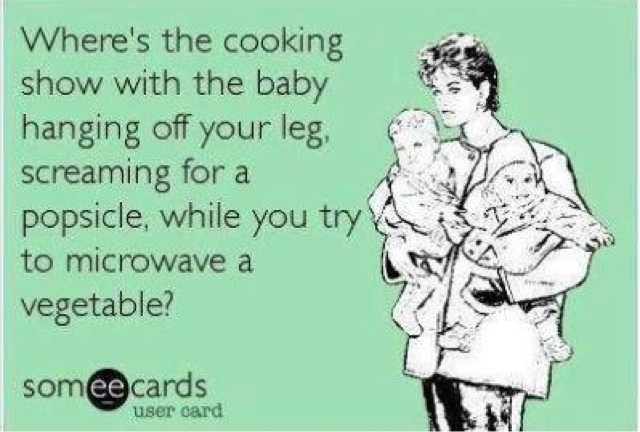 Posted by Kristen at 5:42 PM 2 comments: Links to this post


After a 2 month blogcation.....I'm back. I've still been reading blogs, just didn't feel that I had anything to write about. I think I'm ready to get back into the swing of things now!

Well, it happened. I turned 30 on July 13. I was really dreading it. Ending my 20's was more traumatic than I had thought it would be. But, as the day became closer and closer, I started wanting it to just get here already so that I could get it over with.

I was excited that the hubs had setup my parents to babysit, and we were going to dinner and the movies. I really felt old when he told me that we were taking the kids over to my parents at 2pm so that we were back by bedtime. He told me about this a few weeks ahead of time, so I was excited. He told me the night before while he was on a 24 hour shift, to go shopping for a new outfit. I took him up on the offer of course.

On the day of my birthday, I packed all the kids things that they would need for the day. As well as snacks, drinks, all the things Drew would need, and all the "just in case" items. 2:00 came and we packed up the kids and headed to my parents house.

As we pulled into my parents neighborhood, I started noticing a lot of my neighbors cars. Turns out my hubs had been planning a surprise party for 4 months! My exact words when I saw the cars......"so we're not leaving the kids?" Probably not the response he was looking for!

It was a nice day spent with our closest friends and family. We played corn hole, and beer frisbee. If you don't know what beer frisbee is....google it! You'll be glad you did. I forgot all about the fact that I was now 30, and as the day went on it didn't seem important anymore.

After I got home that night, I was opening all the generous gifts that my friends and family had brought me, and I started feeling so lucky. Who cares if I'm 30.....I'm guessing my 30's will be the best years to come! I had four goals I wanted to achieve before I turned 30.

So I have achieved everything I wanted to before I was 30. Now I'll have to work on a new set of goals for 40. Yikes! 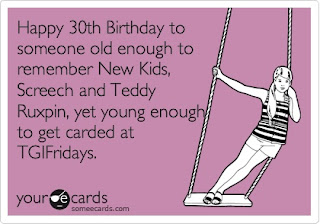 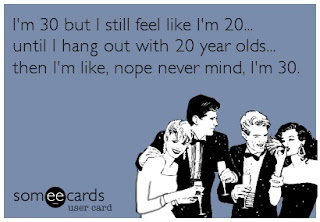 The party my hubs planned for meant a lot. I was touched that he had actually put thought and time into it. He's always a lot better at sweet gestures than I am. Lucky girl, I know. So far, 30 isn't bad. I feel older and wiser....riiiiight. I'm now part of the "Dirty 30"club. Holla! BTW I'm going back to blonde tomorrow. EEEK. What better way to adjust to being 30, than to change your hair color, right? I'm so ready!
Posted by Kristen at 4:44 PM 2 comments: Links to this post