I'm baaaaack. The end of the week got a little crazy for me last week! I had new kids visiting, and kids coming at crazy hours....and lots of finishing touches to do for Drew's 1st Birthday party that was this past Saturday! I am behind on reading blogs, and didn't get to post for two days! I feel so out of the loop! It's funny how you feel like you're missing everything when you don't get a chance to read what everyone has to say for a few days! Or is that just me?

I plan on doing a post tomorrow on Drew's party. I don't have all the pictures together yet.....but of course I have to show a few that I have ready for today! 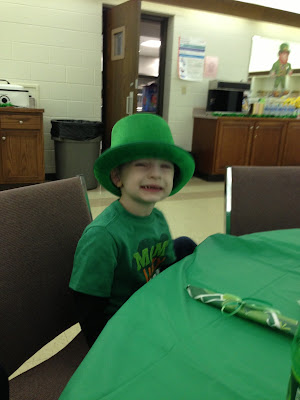 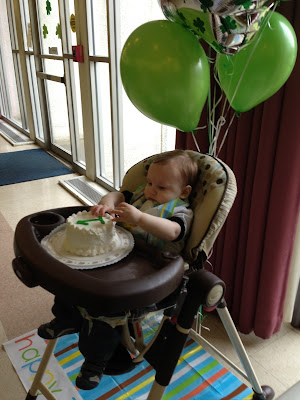 Drew barely touched his cake! He had gotten up at 6am and was basically a zombie by the time the party came at 1pm! He had just had an allergy test two days before and we found out that he is NOT allergic to milk or eggs!!! We are so thankful, and relieved! So his cake was the first time he's ever had anything sweet! He hasn't been allowed to have milk, eggs, beef, wheat, nuts, or any type of fish till he was 1! He's still not allowed any nuts or fish (probably wouldn't give him fish anyway) until 18 months.....but he's good to go on milk, eggs, and wheat! YAY!!! Maybe it was too much of a shock to eat something that sweet! haha 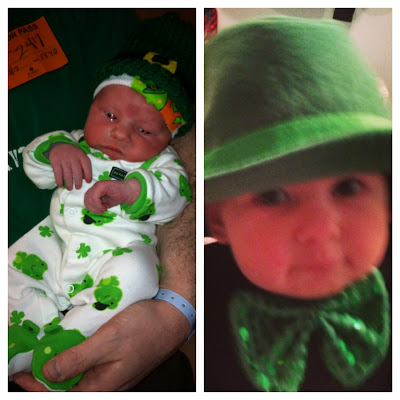 Time flies! I feel like it goes even faster with the second baby! I definitely feel like Drew was just born! My little lucky charms, yesterday on St. Patrick's Day, and Drew's birthday!! The kitchen set behind them is what Drew got for his bday from us. Cole wanted a kitchen for Christmas 2011, but my hubs was all, "that's a girl toy" and bought him a grill instead! Needless to say Cole loves this new kitchen as well! Sometimes the hubs needs to get out of 1950, lol. Although he may have been born around that time....lol. JK 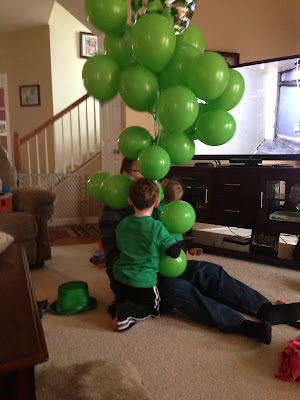 My parents came over yesterday evening....both boys, and my dad playing with some left over balloons from the party. I think Drew would have rather had all the balloons, than the presents!! Tomorrow, I'll have all the pictures from the party. It turned out very cute. :)
Posted by Kristen at 6:26 AM